New stories: Texans on the wrong side of the fence, Postville post-immigration raid, and Manchester refugees

Posted on January 9, 2012 by lizcgoodwin

I’ve met so many fascinating people over the past month traveling to Texas, Iowa and New Hampshire to report on various immigration issues and how they intersect with the Republican presidential contest.

In Brownsville, Texas, I met with Eloisa Tamez, pictured above, and other local landowners whose land was seized by the federal government to make way for several hundred miles of border fence. Because a treaty prevents the U.S. from building anything in the floodplain of the snaky Rio Grande, the government erected the border fence up to two miles north of the river, trapping some Texans on what they refer to as the “Mexican” side of the fence.

In Postville, Iowa, I checked in on the tiny and incredibly diverse town nearly four years after a massive immigration  raid at the local meatpacking plant deported a fifth of Postville’s population.

And in New Hampshire, I talked to the mayor of Manchester about his battle to get a temporary ban on new refugee resettlement in the city. Tens of thousands of Bhutanese refugees have left United Nations-run camps in Nepal since 2008 to settle in New Hampshire and other states. Mayor Ted Gatsas argues that cities should have control over whether they accept refugees through the State Department’s program, and hopes Mitt Romney will help him reach this goal if he is elected president.

Gatsas’ quest for a two-year moratorium on refugees caused much consternation among the Bhutanese community, many of whom were waiting for family members still in the camp to join them in Manchester. Several of the refugees told me that they agree with Gatsas on one point: the existence of millions of refugees in the world is a bad thing. Suraj Budathoki and Narad Adhikari, below, want America to pressure Bhutan to repatriate them, more than 20 years after the country kicked out its ethnically Nepalese population after outlawing their religion of Hinduism. “If the mayor is talking about a moratorium right here in Manchester, he should talk about other countries not creating refugees,” Budathoki said. 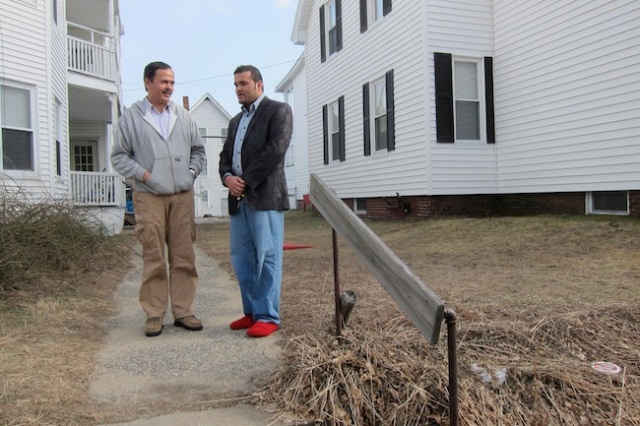